Marter for Congress in Support of Biden Gas Tax Pause 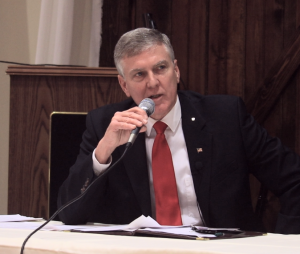 My long term energy plan includes an 'all of the above' approach and a level playing field where there's fair competition that benefits the consumer...Real help is on the way after the election...”
— Jim Marter

"What's being proposed is only a 90 day pause. What we really need is a sound energy policy. In the absence of that, people do need relief and families in Illinois need it in particular," said Marter.

"My long term energy plan includes an 'all of the above' approach and a level playing field where there's fair competition that benefits the consumer. After the Red Wave and I'm in Congress, we'll bring American Energy back. For the time being, we're stuck and people need relief. I'm calling on Representative Lauren Underwood to support this pause. After all, it was the policies she keeps voting for that got us into this mess in the first place. Real help is on the way after the election in November."

Jim Marter is the twice elected and current Chairman of IL-14's Kendall County GOP and also serves as a Deputy on the State GOP Central Committee for IL-14. He is endorsed by over 125 local, statewide and national people and organizations including House Freedom Caucus Member, Congresswoman Mary Miller and the Founder of the TEA Party Caucus in Congress, former Congresswoman and Presidential Candidate, Michele Bachmann. The GOP Primary to pick a candidate for November's election against Democrat Lauren Underwood is this upcoming Tuesday, June 28th. Details about the Marter Campaign may be found at his website, www.MarterForCongress.com.