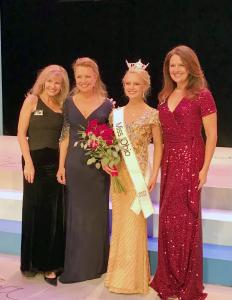 She is following in the footsteps of her aunt and Living Fuel co-founder Monica Craichy.

ORLANDO, FLORIDA, USA, June 23, 2022 /EINPresswire.com/ -- Living Fuel co-founder Monica Craichy was on hand and beaming with pride Saturday in Mansfield, Ohio as her niece, Betta (Elizabetta) Nies, whom she helped mentor, was crowned champion in the Miss Ohio pageant. It was a fitting birthday present for the 19-year-old who is continuing the family tradition of pageant success.

In addition to Monica (Farrell), who was crowned Miss Florida in 1985, Betta had Monica’s two sisters to help her in the process. They will all be able to guide her now as she prepares later this year for the Miss America pageant. Betta’s mother, Kathleen, was crowned Miss Illinois in 1992 and her aunt, Mary Ann, won the Miss New York title in 1984.

People who use Living Fuel superfood nutrition products have performed amazing athletic feats. But it’s also the fuel of choice for everyday people who want to look and feel their best. It can also be used in stressful situations to help someone remain focused as with Betta who needed to stay sharp during the pressure-packed competition.

She excelled in the interview portion and won the Women in Business award. She also won the preliminary talent competition with her piano rendition of Chopin's Etude Opus 10 No. 5 "Black Keys Etude."

Monica helped develop those products after she benefitted from Living Fuel’s flagship product, which was created by her husband, KC, more than 20 years ago. Monica still looked like the picture of health on the outside when her pageant days were over, but inwardly she was struggling with bouts of anxiety and depression that made it almost impossible for her to function from day-to-day. She recovered with the help of Living Fuel SuperGreens, a whole-meal superfood powder KC made out of necessity to help Monica overcome the nutrient deficiencies that were at the root of her depression.

Countless lives have been changed for the better from the Living Fuel products that came about as a result of what Monica went through. And Betta benefitted doubly from her aunt’s experience - as a pageant winner and also from the products she helped develop.

About Living Fuel:
Living Fuel is The Leader in Superfood Nutrition and has been changing lives with world-class superfood nutrition products for more than 20 years. More information can be found at www.livingfuel.com