By EIN Presswire: Travel & Tourism Industry Press Releases on May 17, 2022 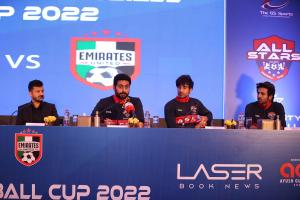 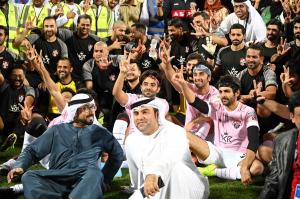 Emirates United and ASFC players celebrate together with organisers and officials 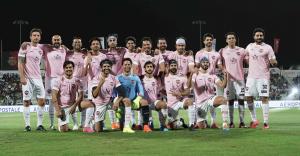 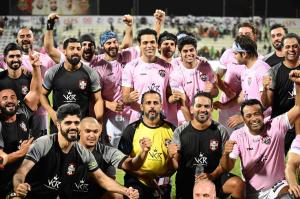 ASFC and Emirates United players in a post game celebration 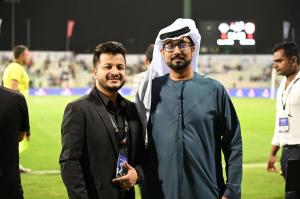 DUBAI, UNITED ARAB EMIRATES, May 17, 2022 /EINPresswire.com/ -- Emirates United were crowned as the winners of the inaugural star-studded celebrity football cup with a 3-0 win over All Stars Football Club.

Fans were treated to some top-class football action as both teams exhibited some amazing Premier League-inspired footwork and set pieces with the hope of emerging victors. Both teams had plenty of shots on goal with ASFC hitting the woodwork on multiple occasions. Fadi Al Khatib, Salim and Abdulaziz Binbaz were the goal scorers for the winning team with Binbaz also winning the Golden Boot award and goalkeeper Fawaz being awarded the Golden Glove.

The celebrity football cup, which was organized by AG Events, is an initiative of GS Sports a division of GS Worldwide Entertainment based out of Mumbai that seeks to raise funds through their charity Playing for Humanity using the beautiful game of football.

According to Ayush Gupta, CEO of AG Events, the celebrity football cup was a success for the players, the fans, and most importantly, the beneficiaries of the event. Bunty Walia founder ASFC and Managing Director of GS Sports said “We loved the response of the people on the ground and on television of the competitive football the celebrities played. Hard luck we lost but kudos to the Emirates United on their deserved win!”

“We are so happy that our first celebrity football showcase in Dubai has turned out to be a huge success. This goes to show that residents of UAE are always ready and willing to unite for a worthy cause through sports. Congratulations to both teams for treating the fans to a thrilling football match. This is just the beginning of many more celebrity activities to come, so watch this space,” said Gupta.

ASFC Gesture Wins Hearts
In a gesture that won the hearts of the fans and the viewers, the Emirates United team received a guard of honor from ASFC as they headed to the presentation area to collect their medals.

“It was an exciting football match for us as players. Football brings people together and we are also proud to have been part of this noble initiative to help our brothers and sisters who are in need. We hope to be back again in Dubai for another exciting event in the future,” said Abhishek Bachchan.

“Emirates United is proud to have been part of this important event. Playing against ASFC is a dream come true and an unforgettable experience for us. Most importantly, we are happy to support a noble initiative - one that will help the less fortunate in our society. We look forward to more exciting events in the future,” said H.E. Nasser Al Neyadi.