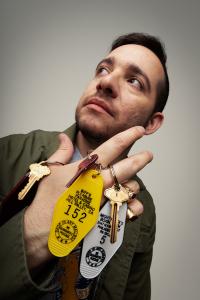 Hollywood has been a major inspiration in my evolution as a photographer and artist and I wanted to create a unique collection as an ode to the movies and series that have influenced my journey.”
— Joey Franco
MONTREAL, PQ, CANADA, May 17, 2022 /EINPresswire.com/ -- Emerging NFT visual artist, Joey Franco, has released for sale on OpenSea, his Genesis collection of film and television inspired motel key fob photographs. Minted in December 2021, this collectible series consists of 70 motel key fobs inspired by iconic movies and television series from Pulp Fiction, to Seinfeld as well as animated classics, horror films and even Marvel blockbusters. There are also ten bonus images.

The lighthearted and colorful 1 /1 editions of the photographs show the key fob adorned with an address or a reference to a location from the film or series as well as curated keys that are period and content correct. 70 NFTs are being released for purchase today, 10 bonus NFTs will be available for purchase later this year. Holders of the regular keys will at that time be given the possibility to purchase a maximum of 1 bonus NFT key on a first come first serve basis.

Franco is a multidisciplinary visual artist whose work has covered the gamut across commercial, editorial, and artistic photography. Born in Montreal, he honed his creative craft in the streets of New York city where his passion for art photography was born.

“Hollywood has been a major inspiration in my evolution as a photographer and artist and I wanted to create a unique collection as an ode to the movies and series that have influenced my journey”, said artist Joey Franco. “Almost anyone with access to electricity has some affinity to a favorite movie or TV show. Hollywood has captured the hearts of the planet for generations, and the Hollywood Key Fob Series is sure to bring out the emotions of moviegoers, young and old – in all corners of the planet.”, he added.

The artist is available for interviews.