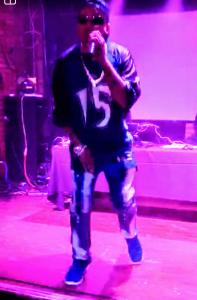 With a stunning blend of enriching rhythms and song writing, C.L.O.S is proving his haters wrong and making a name for himself in the Hip Hop world

MINNEAPOLIS, MINNESOTA, UNITED STATES, May 17, 2022 /EINPresswire.com/ -- A refreshing and formidable name in Hip Hop, talented powerhouse C.L.O.S. (Cold Lyrics on Site) began his musical trajectory as a driven and passionate poet. Turning his poetry into Rap, the artist delivers his love for the genre, while building on powerful and moving themes for his audiences.

On a mission to have his voice heard and to let every listener with a dream know that they can accomplish their goals if they stay motivated, C.L.O.S is set for success. Offering his audiences, a shoulder of relatability, the dynamic artist intends to let listeners know that they are not alone and that all emotions are valid and real.

The artist released his first solo album titled, ‘C.L.O.S. (Cold Lyrics on Site)’ on May 2nd, 2019, on all major platforms, and only recently re-released his debut album on April 30th, 2022, owing to changes to the album cover.

The dynamic artist’s second solo album, ‘Old Money’ is set to release soon for audiences, with production and mixing by Dari Secktor. Complementing each other’s soundscapes and song writing, Secktor and C.L.O. S’s craft promises a range of emotions, ranging from mellow and poignant melodies to enlivening musical compositions.

“You’ll get something out of it, I am not just putting a whole bunch of rhyming words together what makes my style unique is that I am versatile, I don’t sound like any other artists,” says C.L.O.S regarding his music.

Visit C.L.O. S’s website to stream, download, and buy the artist’s exciting new music and follow the artist on social media for updates on new releases. For interviews, reviews, and collaborations, reach out through the artist’s email.

C.L.O.S. which stands for ‘Cold Lyrics on Site’, is the rap identity of an up-and-coming Hip Hop artist who is swiftly rising towards success. C.L.O.S began rapping after being motivated by his friend Josh who formed a group with him titled, ‘2 thuggish’ giving him valuable headway early on. Adopting his Rap name from his friend Ronald who suggested the artist the name, C.L.O.S has ever since, been on an exciting upward journey, which began with his foray into poetry.

The eclectic artist has been making music for 28 years, but did not receive a big break early on, obstructed by the many hurdles posed by affordability. As a result, despite having a formidable set of skills, C.L.O.S did not invest in marketing his musical craft. Inspired by the likes of icons such as the late Hip-Hop maestro, 2pac, the rising artist hopes to make music that is poetic, moving, and heartfelt, cementing himself as both a rapper and poet. With a magnetizing musical craft, C.L.O.S. hopes to put Minneapolis and Minnesota on the Hip Hop map, giving his home city the much awaited and well-deserved attention that it deserves.